The second national workshop in Austria was organised by Lk-Stmk on 18-19 January 2017 on the occasion of Central European Biomass Conference (CEBC 2017). The workshop consisted of two parts – study tour and presentation in Halbenrain and SUCELLOG project presentation – in Graz on the day after. 11 people participated on the study tour and about 35 people attended the SUCELLOG presentation during the conference.

The study tour was organized as part of the official program of the CEBC 2017.

On 19th of January 2017 SUCELLOG project was presentated during one of the parallel sessions of the CEBC 2017. The presentation addressed the mobilisation and supply of agrarian residues based on the example in Styria. 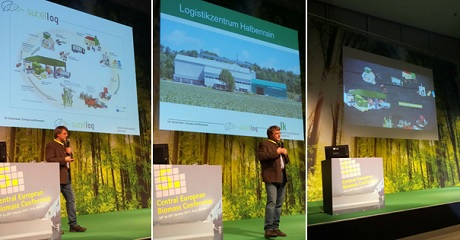 The third national workshop of SUCELLOG in France was organized on the occasion of the final conference of another project coordinated by Services Coop de France about the state of art of agricultural biomass logistics. The aim of this project was to propose solutions for logistic issues in implementation agricultural biomass value chains.

The morning session was dedicated to the logistics of agricultural biomass for anaerobic digestion and combustion and was divided in two parts: the first hour discussed results of the agricultural biomass logistics project realized during the last 12 months in France; the second part was a round table discussion. SUCELLOG was presented during this round table along with two biogas projects and a wood logistic project implemented by the National Forest office for wood chips.

The second national workshop in France was organised on 16 December 2016 in Paris. The event was organized by Services Coop de France jointly with the third project steering committee meeting and was focused on the biomass logistic issues. During the first part of the morning, the steering committee discussed about the SUCELLOG project. During the last hour, the SUCELLOG project (results and barriers) was presented by Camille Poutrin. 12 people participated in this event.

The second national workshop in Spain has been organised on 17th of June 2016 at the Fair Centre of Madrid (IFEMA) on the occasion of International Fair of Energy and Environment - GENERA. It has been organized by the Spanish Association of Renewable Energy Companies (APPA) and UNION for BIOMASS. The workshop consisted of two parts: the first part addressed the use of biomass for power and heat generation, the second part focused on practical experiences for biomass resource mobilisation and included the presentation of SUCELLOG project. Around 33 people participated in this event. Workshop participants represented agrarian sector, agro-industries and potential biomass users, energy companies, policy makers, Agricultural trade Union, academics, international representatives, and other people from several engineering and energy consulting companies.

On the 23rd of September 2015, in the headquarter of D.R.E.Am. Italia s.c., the Italian National Workshop of the SUCELLOG Project was carried out. The participants came from different regions. During the meeting the project and its national and regional activities were shown. The interest of the non-target regions participants to become auditors were evaluated and the next training activities were set up.

Around 40 people participated in the first national dissemination workshop in Spain. The workshop "Energy Efficiency and Bioenergy cooperatives" has been organised by Spanish Cooperatives in Madrid and geathered representatives of agricultural cooperatives, agrarian associations, policy makers and energy efficiency service providers. Spanish Cooperatives presented SUCELLOG goals and the results achieved so far in cooperatives such us San Miguel de Tauste. Workshop participants were informed about the opportunity to benefit from the training activities of the project in order to acquire the skills to become an auditor in building an agro-industry logistic centre.

Lk-stmk organied a workshop in Vienna on 18 June 2015. The objective of the workshop was to inform non-target regional agrarian associations about the project and encourage them to take part in the training to become auditors.

SUCELLOG at IGW in Berlin

Handbook for agro-industries interested in starting a new activity as biomass logistic centre: carrying out a feasibility study

Handbook for agro-industries interested in starting a new activity as biomass logistic centre: the basic demand of information

Proceedings of the IEE-II Bioenergy projects conference are now available